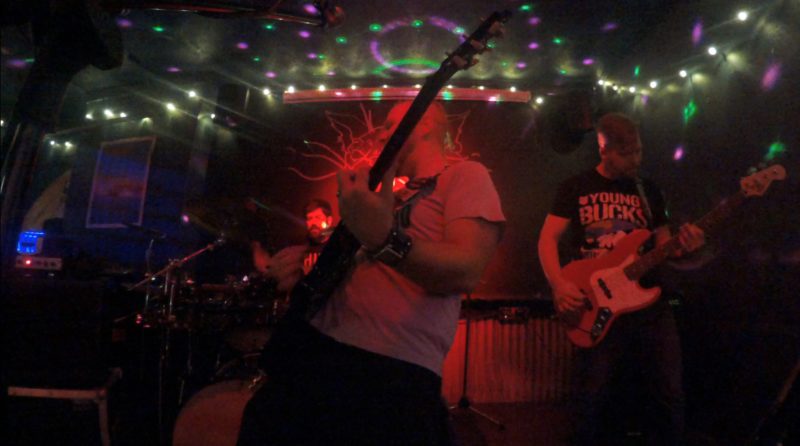 The holiday season is upon us, and I got an early Christmas gift this year! I always intended for Sempervivi to grow into a full band, both onstage and in the studio. After two years of performing solo acoustic, the right dudes came along to make my vision a reality.

Jonathan Grayson contacted me after a solo gig August 27th. He saw me open for our mutual friends The Rough Customers at Lynagh’s Irish Pub. He didn’t know that I had been trying to expand my project into a band, but he indicated via Instagram that he was available to join on bass. His tryout was a great success and we hit it off right away. We commenced weekly practices at my place, strategizing the band direction while we tightened up the music.

Of course, if we were going to electrify the band, we needed a drummer. I resumed advertising on Craigslist and our social networks for the right candidate. I was very specific about our needs, since I had gotten responses from some seriously unqualified candidates previously. Enter Rob Grove. I knew him from his previous band Fuzzwood, where he played keys and bass.

As is his custom, Rob casually threw out a proposal on Facebook to try out. However, he claimed not to be a great drummer. He set expectations low for his October audition, and blew us away. Despite not having a kit of his own at the time, he came in well prepared and knew all the songs. He even worked up some great harmony vocal parts I had not previously thought of. Our personalities all clicked, and a power trio was born. 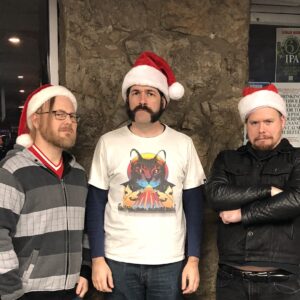 Posing after the Noise for Tots benefit show.

I had several solo dates already booked reaching into 2018. I thought it would be January or February before we would be ready to play out. After a few weeks of full band practices, Rob ensured me he would be ready to go by the December 1st gig at Best Friend Bar. Despite issues with shared gear, the order of the bands, and the club’s PA system, our set went well. There was a great crowd, and we got a lot of good feedback on the new lineup. We then played the third annual Noise for Tots benefit show the following week, spreading holiday cheer to some less fortunate kids. I even made an awkward appearance on live local TV to hype the event. Al’s Bar hosted our third show as a band after that.

We finished 2017 strong! I’m really looking forward to hitting up some new towns and venues (book us!) with these guys. We’re having a great time hanging out in general and are starting to gel as a band. We’ve got a ton of new music in the works as well for the third record, a full length. Stay tuned in 2018.

Next post: Back at One (This is Not the End)