Highs and Lows and More Highs 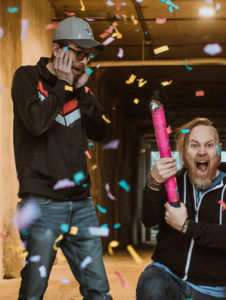 Always a good time when we get together.

This post is way past due. The past ten months have definitely been eventful for this band. Life in general has been very hectic. As I write this, our first full length Can’t Please Everyone is at the plant being pressed! I wish I could say that each event leading to this time was a happy one.

Since my last entry in November, Jeremiah, Simon, and I played a lot of shows in the Louisville and Lexington area. Along the way, we got super tight as a live band, and made a ton of new friends in the region. Truth be told, we quickly became the best of friends. I needed that. 2018 was not a banner year for my mental and emotional health. Since Jeremiah and Simon joined the band, I bounced back, and we knocked out our goals left and right.

In March, we took professional band photos with the super talented Ariana Jordan. It was an absolute blast, and we got some killer shots from it in Lexington’s distillery district. That was just for starters, though. It was finally time to hit the studio and start tracking the new record.

A time to build up, a time to let go 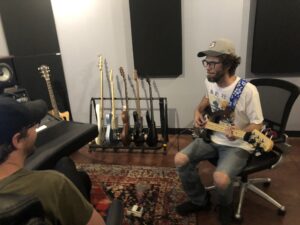 Jerm opening up the “bass” pro shop in the studio.

I’d been dying to get these songs out, and I finally had the freedom to start planning our course. After much consideration, we chose to record with Cole Clark at Sightglass Sound. His reputation as the original drummer for Equal Vision Records act Picturesque, along with a rapidly growing reputation as a producer, sealed the deal. We started tracking in June, and finished the first singles “Ride or Die” and “99” so we could shoot music videos for them! It was so wild hearing the final mixes, and then seeing them visualized.

Unfortunately, as we were putting the finishing touches on the record, Simon made a careless social media post which offended many of our friends here in Lexington. Long, painful story short, Jeremiah and I had no choice but to let him go. We do not endorse any kind of hurtful words or actions toward LGBTQ+ persons, and we needed to set that record straight.

Fundraising and looking ahead

With tracking finished, we started a crowdfunding campaign to cover the final mixing and mastering, as well as the artwork by Chris Schweizer and other expenses. We reached out to friends and family, and they helped smash our goal. We raised over $3,000 in less than 30 days! Not bad for a small Kentucky band. All totaled, 108 backers from all over the USA, as well as Russia, Japan, Germany, and England, chipped in. Holy cow.

So here we are again, seeking a new drummer on the eve of releasing our first LP. This time, things are different, though. Unlike in previous years, the band has real momentum. The music videos and the successful fundraiser made a lot of people sit up and take notice. Many of our friends in the scene have taken us aside to tell us to keep this band going, and that we have something special. Judging by the wide array of applicants we’ve received so far for the drum throne, we believe it.

RSVP to our album release show September 27th at the Green Lantern Bar.