In December 2016, I set out for a most unprecedented expedition with my friends – the Bad Apple Records Winter Songwriters Tour. This tour was the second annual trip featuring the main songwriters from three acts on our label. We played a total of nine shows in nine days with lots of long drives, but we had a great time sharing our music with friends both old and new. This was the very first Sempervivi tour. It was also my fourth tour lasting over a week, including past trips with Stellar Kin and Analog Apostles. Since I have some Christmas season downtime and the memories are still fresh, I will recount them below. 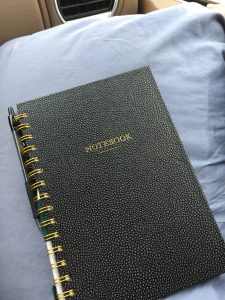 I had been preparing for tour for weeks. Besides finish all the work projects on my ledger, I had to coordinate child care, pack food, and update my merch setup. I also I had to rehearse, since I was playing bass in All Around the Dinner Table. Usually, I play lead guitar with the full band version of AAtDT, but we had a unique setup for our songwriters tour. We made the most of our personnel and space. We crammed Brandon from AAtDT, myself, and Andy and Tyler from Why They Came into Brandon’s GMC Envoy along with our bags and gear. Every square inch of space available was packed. I opened up the shows with my solo acoustic set, then played bass for AAtDT with Andy on drums. Then we switched up and had Brandon on drums for Why They Came with Tyler playing bass.

I ran down my checklist before I left my house in Lexington. Unfortunately, my wallet wasn’t on the list. I realized it halfway to the first gig Owensboro, and had a small meltdown. There was some cash in my merch and guitar case, but it’s always good to have ID. I ended up having my wife overnight my wallet to a gig later in the tour. I still had to make it to Owensboro in time to run through some songs before the kickoff show. 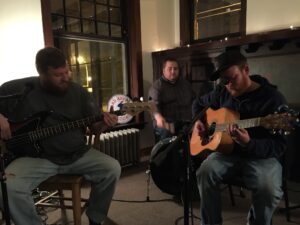 Why They Came’s set in Chicago

We kicked off tour with Why They Came’s CD release show for Holy War Hymnal. It was at Andy’s parents’ house in Owensboro. There was a great crowd of family and friends there, including an 11-month old that may have been my most attentive listener ever. Because of my wallet setback, I got in a hurry and basically filled up on cookies and chips for supper. I definitely wasn’t in a good state of mind all night, but things definitely picked up in the days to come. We headed out the next morning for Indiana.

After hours of seemingly nothing but empty fields and Pro Life billboards, we arrived at the Powells’ house in Lafayette, IN. Brian and Carrie are old friends from my former church in Bowling Green, and we had a great time visiting with them and their girls. We played at Brian’s photography studio co-op Second Level Studios, which the tour stopped at last year. There was a small crowd due to a parade in town, as well as several people coming down with the flu. We did however have a great time and made some new fans.

Chicago was also a blast. There was some snow on the way up, but thankfully it didn’t hold us up. We ate Giordano’s Pizza (a must) en route to the gig at Jesus People USA, a Christian community downtown. We played in one of their buildings’ living room and met some amazing people. Brandon interviewed members of the group for the podcast over a marathon Scrabble game. Afterward, we had the whole floor to ourselves to sleep in. The next morning, we ate breakfast in their cafeteria. We had a deep theological discussion there with guitar legend Glenn Kaiser! How rad is that? 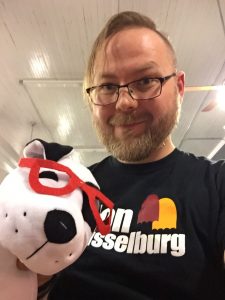 We made another long drive to my old stomping grounds, Paducah, KY. An hour out, we got a flat tire on an exit ramp. Thankfully, we had a full size spare. We still made it in time to set up for our friend Bethany Pedigo’s opening set at Dry Ground Brewing. The staff was super cool, and we had a great time chilling by the fire afterward. My old bandmate Josh Lott from Stellar Kin put us up for the night, and was cool catching up.

Each show was good for its own reasons, but my favorite gig was Dog Ear Books in Russellville, AR. I love local businesses on the main streets of small towns. This independent bookstore had its own charm. We arrived in time to enjoy some local barbecue and take our time setting up. The crowd trickled in throughout the night, and were very receptive. The staff were also great, sending us home with swag featuring their mascot, Deb the Dog. My son loves his plush doll.

Then there was a seemingly endless rural drive to Dallas. We spent the afternoon with Andy’s sister Emily’s family, 30 miles from downtown. Unfortunately, we left for the gig at a terrible time. It took two hours to reach Opening Bell Coffee. Brandon dang near lost his mind over the traffic. The rest of us were thankful we had empty bottles in the truck, if you catch my drift. We arrived in time to quickly set up and played abbreviated sets. It made a big difference that the venue had a PA, and the staff helped with setup. Emily’s group and the other patrons dug our stuff. Afterward, we all tried our first In-n-Out Burger. Not bad. 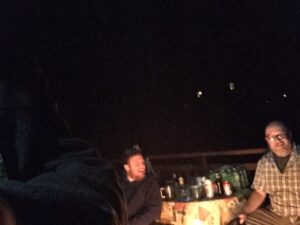 On the next drive, we stopped at Whataburger (beat the pants off of In-n-Out) and had the absolute wackiest conversation with an elderly Louisiana native. The last leg of our tour started with Cups in Fondren, a coffeehouse in Jackson, MS. Again, we encountered friendly and helpful staff. Like with many java shops, Cups is frequented by college students, and we ended up being background music for their study sessions. It was awkward playing sets in a mostly empty back room. We still made connections with some cool kids.

Acworth, GA was a great time as always. We played at Brandon’s parents’ house, where Stellar Kin had stayed many times over the years. His dad Joe made some amazing hot wings, and we basically had a house party with friends and family. Due to a problem with our bass, Brandon played the AAtDT set mostly solo. He played a lot of material I hadn’t heard in awhile, and just knocked it out of the park. So hyped for his next record. After the show, we stayed up late by the fire jaw jacking with Joe. He is a certifiable madman and we all love him for it. He said something so hilarious that we thought Andy would legitimately die of laughter.

Our seemingly quick trip to our Bowling Green, KY finale was interrupted by the slowest, busiest Wendy’s on Earth. We set up in my old Redfoot bandmate Cort Basham’s dining room. Bethany once again opened, as well as singing with AAtDT. The Bashams, salt of the Earth, were great hosts. It was fitting playing our last show of tour in my favorite place, the Happiest Town on Earth.

One last long drive and I was home in Lexington. The last time I had done a tour, I didn’t enjoy myself as much as I should have. Part of it was that I had done the majority of the work booking and planning it. I didn’t know if I would get to do another tour due to family commitments and schedule. This songwriters tour was everything I’d hoped for, especially due to spending it with some of the best friends ever.