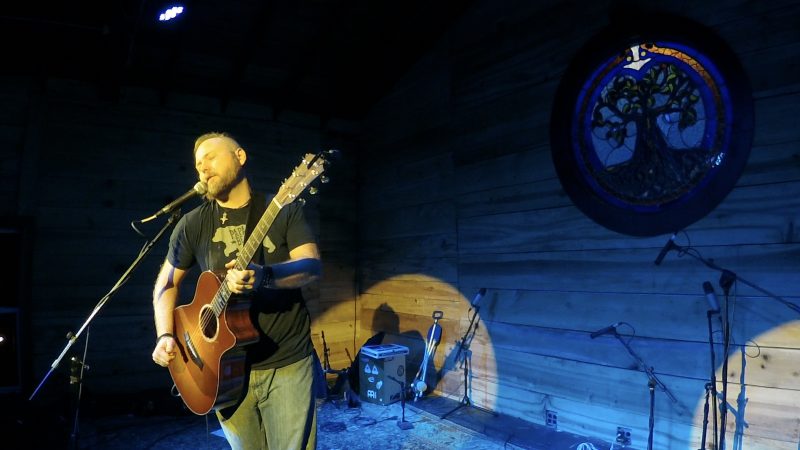 Summer has come to a close. That means I’m past due for my every now and then blog post to give you an update on what the ‘vivi has been up to. As usual, this will be a general recap of shows I’ve played the past few months. It also, predictably, will bring you up to speed on my perennial search for bandmates to complete my punk rock power trio. So let’s jump in…into a…pile of leaves. Because metaphors!

I finished out the monthly Songwriters Round series at Lexington Public Library in August. During the six month run, we showcased some of the most talented artists in the region. As a bonus, I got to network with some new singers who I previously hadn’t heard or played with, but had heard a lot of buzz about. The shows were fun, but the crowds varied from small to really small. It was a lot of effort with seemingly not a lot of return. Sometimes gigs turn out that way, but I always try to look on the bright side, which was mingling with more new-to-me artists.

This summer, I also played a few new venues that I had been wanting to. May marked my first gig at The Burl, which is one of my favorite venues to attend shows at. Big ups to Cody from He’s Dead Jim for hooking me up with that gig, which was their release show. I got to put together another bill at The Burl later in the summer. Hopefully, it will be a regular stop.

Then, I played Best Friend Bar for the first time in September. I randomly met the owner at my friend’s wedding in July. My toddler actually led me up to his office at the wedding venue. Talk about a chance meeting! He trusted me to put together a mixed genre bill with local reggae band Sunny Cheeba and Covington art rock ensemble Common Center. It was an epic Thursday night of music. Consequently, the owner trusted me to assemble a weekend bill in December with my friends from Cincinnati’s tribal rockers Acarya.

My current employment situation necessitates that I earn some extra income. Thus, I started mixing in a few cover gigs. Typically, I avoid these because I don’t always enjoy playing covers. The idea of being background music or taking requests is not appealing to me at all. However, sometimes these shows can be fun, and I can sprinkle the setlists with my own originals. Learning a ton of covers also helps me stretch myself musically. Sometimes it’s good to have to swallow one’s pride, especially when it means using your talent to provide for your family.

The ability to add new venues to my usual local rotation makes things easier. It’s always good to have more time to actually write and practice, rather than always hustling to get booked.

Speaking of writing and practicing, I’ve gotten really busy with those as well. I now have about ten songs completely written for the next record and a few others in progress. While “Always Alive” mostly focuses on love and family relationships, the new record, tentatively titled “All the Feels” tackles the topics of politics and celebrity. There is definitely a lot of anger, lamentation, and overall hands-throwing-up in disgust and confusion. You know, the usual punk rock stuff.

Speaking of punk rock, I picked up a bassist who is punk AF after a recent show opening for my pals The Rough Customers. We’ve been practicing for several weeks together now, and he’s about as hyped as I am about the music. This is real motivator for me, both to push forward in writing new songs, and to find the elusive drummer to complete our power trio. This dude is my kind of guy (he’s even a wrestling fan, too) and we really hit it off right from the start. Cross your fingers, kids. I think after several false starts, Sempervivi may very well grow into a real life band by 2018.