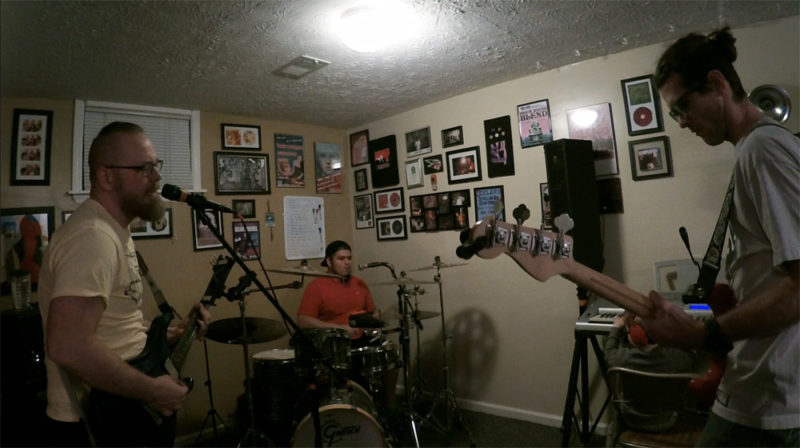 What is it they say about finding what you’re looking for when you least expect it? In June, Sempervivi played back to back gigs in Newport and Dayton before Rob and Jon split for new projects. Months into my search for each new bandmate I needed, I actually started to wonder if this group had ended on a high note. Was it worth the hassle to round up new potentially toxic humans just to keep this band going? All I knew was that I didn’t want to go back to playing solo.

Earlier this year, our band started auditioning drummers when Rob announced his impending departure. We had a few applicants who, let’s just say, didn’t click when and if they showed up to try out. I had emailed back and forth with a lad named Simon, but the conversation dropped off before we scheduled a tryout. Months later, I was searching on my own when I saw Simon posting in a local musicians Facebook group. I hesitated before reaching out, since it had not worked out before. I hit “send” on the Messenger app.

By the time he showed up to audition, Simon and I had messaged each other several times. I felt at ease knowing that we had a lot in common, from our faith to our musical tastes. Sitting down at the practice kit, he informed me that he had “meditated” on the audition tracks. From the first downbeat, I could tell that he wasn’t just blowing smoke. This dude played so tight. His kick pedal speed, as well as his snare control, just blew me away. We instantly clicked, and after a week probation period just to make sure, Sempervivi had the perfect fit on drums. Next, it was time to complete our power trio with the perfect bassist.

As Simon continued learning the back catalog, we put out feelers to find the right bass player. Once again, a chance post on a Facebook group lined up auditions. Two would-be bassists showed up for tryouts. Both made good showings. However, Simon and I agreed that Jeremiah was the man for the job. He adds the perfect melodic flair a bassist needs to in a pop punk trio. He’s a laid back country dude who plays multiple instruments in his other band Manitoba Rock n Rolla. Their band name is a wrestling reference, so that fandom is something he and I have in common. Bonus!

Jeremiah also quickly started learning the set. We gelled as players and as friends instantly. There are nothing but positive vibes in this group. Therefore, I felt confident enough to start booking shows with the new lineup. I can’t wait to show off what these guys can do.

Previous post: Back at One (This is Not the End)