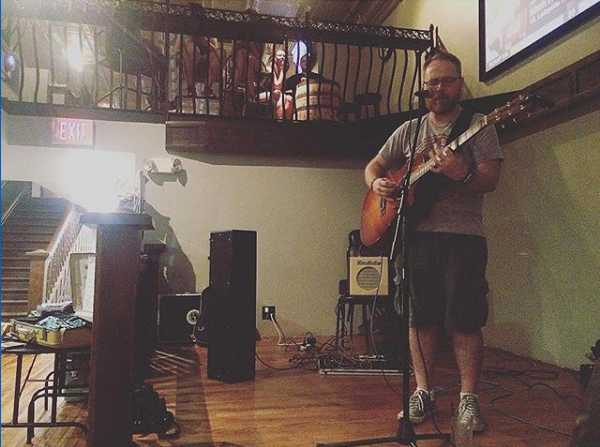 Wowzers. Today marks the five year anniversary of this wild musical ride. On September 5th, 2015, I played the first Sempervivi show, an after party for the East Bridge Music Festival in Owensboro, KY. I had just finished playing guitar in a set with All Around the Dinner Table. The temperature was 104 degrees outside, so it was a huge relief to hoof it a block down to the air conditioned CYO Brewing. I had just gotten copies of the first EP “Artifacts”, so this was more or less a release party. My friends Why They Came and Eric Delong also played. A great time was had by all on my maiden voyage. Let’s rewind a bit, though, before we get into what happened the last few years.

I played guitar in the band Analog Apostles from 2013-2014, recording and releasing two EPs with them. After our summer 2014 tour, I decided it was time to move on. I had a lot of good times playing with those guys. However, I was about to become a father, and the stress of managing and booking the band in addition to playing shows, had worn me thin.

After my son was born, the itch to continue making music returned. My wife encouraged me to start a new solo project with the original music I had banked. She is pretty much never wrong. Since I was wary of joining or starting another band, easing back in as a solo artist sounded good. I started recording full demos in my home studio from the lyrics and hooks. 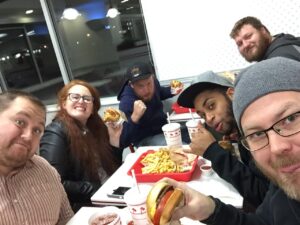 In-N-Out Burger with friends on tour.

After that first show, I finished 2015 with a few local gigs. In early 2016, I continued playing Louisville and Lexington. Then, I hosted a songwriters round at Lexington Public Library. I handled booking, publicity, and sponsorships. Heck, I even set up the PA. I enjoyed rounding up Central Kentucky’s best songwriters. Ultimately though, I was glad it when it ended. I needed to devote energy to songs that would take the project in a new direction.

That Fall, I assembled friends to record Sempervivi’s first full band EP “Always Alive”. Lucky for me, they were some of the tightest players around. We burned through five songs in three furious days at Sneak Attack Recording. The finished product mixed indie pop and punk, a natural step from the stripped down acoustic EP.

Once we had a rough mix of the song “So Close”, I gathered more friends at Veterans Park to film the music video. Once again, I went all out, driving to Louisville to rent a bear costume reeking of cigarettes. This was also my first time storyboarding a video. We combined live footage of the studio players in the Practice Lair with a hilarious brawl in the woods.

While the EP was mixed, I played an acoustic tour with my Bad Apple Records labelmates. I opened with sets in living rooms and coffee shops. Then, I joined All Around the Dinner Table on bass. We played venues from Chicago to Dallas.

The year 2017 was a milestone. Always Alive dropped April 4th. The full band release show packed Al’s Bar, and I played a handful of follow up full band and duo sets that summer. A Fall set at Lynagh’s with The Rough Customers caught a bassist’s attention, and Sempervivi officially grew into a full time band. I finished out the year with a short solo tour of Indiana and Ohio, then two local shows with the new band.

We started 2018 with gigs in Lexington, as well as Huntington, WV. By Summer, our personal differences had grown too much to bear, so my bandmates left after a short tour of Ohio. I was determined to keep the dates that they opted out of. Thankfully, friends stepped in to fill their spots.

By Fall, the band was back with a new lineup including Jeremiah, Daniel, and Simon. We instantly hit it off and had a blast playing high profile gigs in Lexington and Louisville. All the while, we polished up some new songs as we prepared to hit the studio. 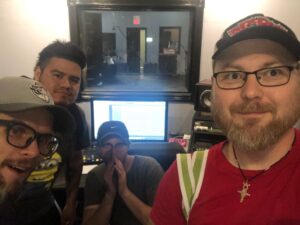 Finishing our first LP “Can’t Please Anyone” at Sightglass Sound

2019 saw us play to some killer crowds throughout Central Kentucky. After a sick set at The Burl, we laid out plans for the LP “Can’t Please Everyone”. Since this would be our biggest endeavor yet, we set up a crowdfunding campaign. We all hustled to get friends onboard to help fund the record. Fans were rewarded with fresh new merch, in addition to the physical CD, featuring art by Chris Schweizer. All in all, we raised over $3,000 to finish the record.

Cole Clark at Sightglass Sound produced our first LP in Summer 2019. We couldn’t have had a better experience. This was the natural progression of our sound. The new record featured a more aggressive punk rock style. Gang vocals and horns beefed things up. Unfortunately, after finishing the LP, Simon had to depart. Notwithstanding, we packed the Green Lantern for the release party. Confetti flew. Cupcakes were consumed. It couldn’t get any better.

As 2019 became 2020, Jeremiah and Daniel both left to pursue other interests. Then, Chase and Justin stepped in to complete the rhythm section. We took home the 2020 LEXI Award for Best Punk Band. Before COVID-19 hit, we played a handful of killer regional dates.

Reflecting on our 5th anniversary, this band has definitely been a wild ride. Sometimes I can’t believe I’m still pressing on at this stage in my life. The music is what keeps me sane. There’s nothing like creating art with other musicians. Stick with us, because there’s plenty more punk rock to come!